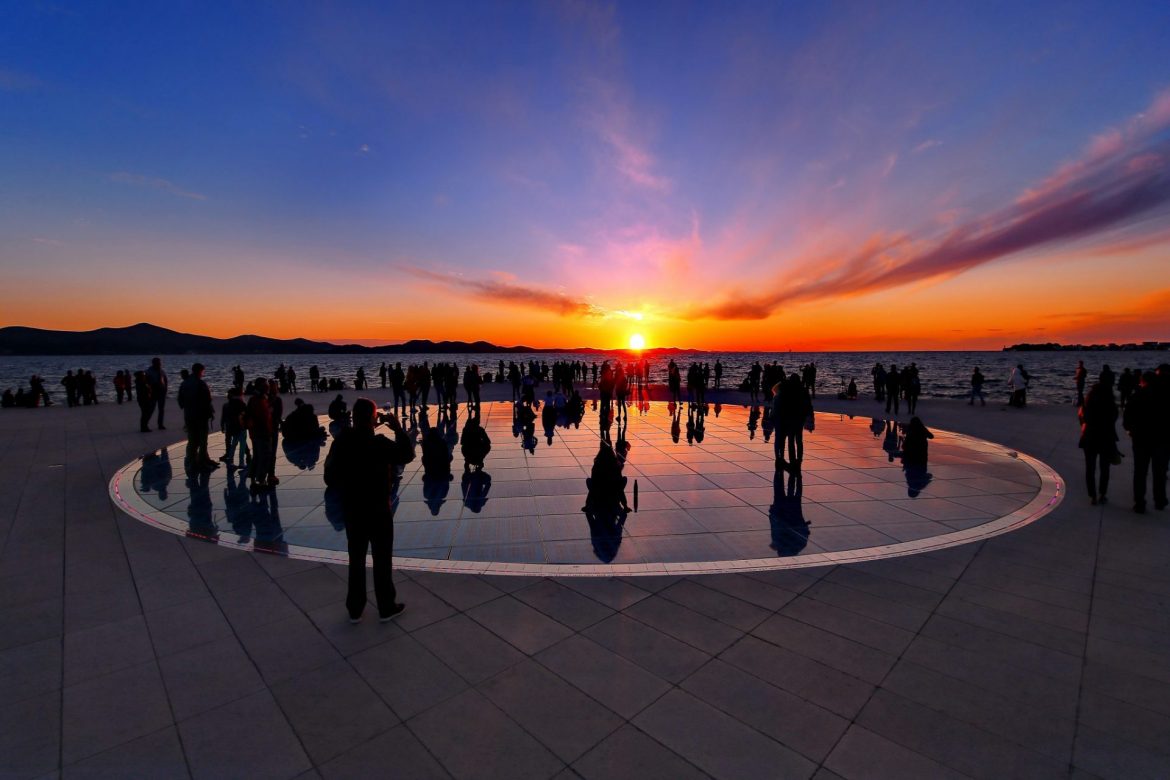 How much do you know about the city of Zadar, other more or less known gems in the area and unique experiences awaiting you there? In order to give you an insight into the fascinating destination and inspiration for your next trip, here’s a list of facts and curiosities you may not have known before:

Zadar… where the ancient meets the modern

With several millennia of existence, Zadar even has the main street that is said to be older than the city itself. Songs have been written about Kalelarga, as it is called by the locals, even though its official name is Široka ulica. It happens to be the pulse of the city.

Nowadays, Zadar is most famous for its modern attractions: light installation Sun Salutation and Sea Organ. Both are works of art of Zadar-native architect Nikola Bašić, who celebrated both his city and nature with his work. Namely, Sun Salutation is a mini solar power plant, which represents the planets of the solar system. The names of Zadar’s patron saints (all 4 of them!, each with a church and own annual feast day) are inscribed on the chrome ring around the ‘Sun’. The Sea Organ is played by the sea, and the  tones and chords reflect the traditional klapa song matrix.

These two are best enjoyed at sunset. Yes, that sunset. The most beautiful one in the world, according to the famous film director Alfred Hitchcock.

It’s the awe-inspiring sunset. The naturally heart-shaped Galešnjak island. It’s the former royal seat of Croatian kings and dukes, Nin, which was declared a top European romantic destination. It’s the barkajoli boat ride in Zadar. It’s the story behind the Sphinx of Zadar. In other words, there are a lot of unique details to put in a romantic package in the region.

Yes, the Croatian coast is known for its numerous islands, islets and rocks. Altogether there are more than 1200, half of which are skerries. The other half, i.e. some 600, are islands and islets of all shapes, sizes and profiles scattered all over the Adriatic Sea, from north to south. 150 of them form part of the Zadar archipelago, and nearly 400 can be found in the wider Zadar region. It is no wonder then that the area is a top destination for all fans of sailing.

It’s the islands and the sea. It’s rivers and lakes. It’s the mountain, too. Rarely can there be such a region found that offers such diversity of protected natural areas in a relatively small space. The most famous ones in the wider Zadar region include Paklenica National Park (mountain), Kornati Islands National Park, Telašćica Nature Park with the highest cliff in Croatia, river Krka National Park, Vrana Lake Nature Park.

Did you know that Nin is known for its Church of the Holy Cross, referred to as the smallest cathedral in the world? Or that luck might come your way if you touch the golden toe on the Statue of Gregory of Nin?

How about Veli Rat, the highest lighthouse in Croatia, on Dugi Otok island? It is known for its yellow colour that supposedly stems from 100 000 yolks.

There’s also Pag, well known for its lace and lamb cheese, which is referred to as the ‘moon island’, because its relief resembles that of the moon.

The deeper you dig, the more fascinating the city and the region becomes. From peaceful villages such as Petrčane to the vibrant city of Zadar, from landmarks to less known sights, there are a lot of stories to be told and discovered. Stories that give you a clearer perspective about the region, once and today.